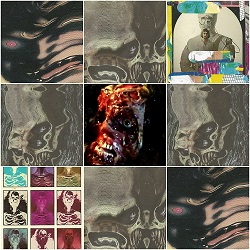 For the sequel to 2015’s film evisceration case study, we disfigure four vhs gore classics directed by Olaf Ittenbach. Ittenbach’s films push the limits of splatter and require great resolve to endure for even the most desensitized mutants. Bits and pieces of decayed vhs audio are crudely stitched together to create dark and unpleasantly rotting ambient discompositions. Nasties included in this three-hour set include: Black Past (1989), Premutos (1997), Beyond the Limits (2003), and the masterpiece, The Burning Moon (1992). Edition of 20 double cassettes, full-color artwork. All sound sampled, mixed, and edited (from the films) by D.Dlugosielski, 2017.